This article was originally posted on codingBox - a review and discussion site for all things code- and kid-related.

Project Bloks is an active research project currently being undertaken by Google Research & Education, Google Creative Lab, IDEO, and Paulo Blikstein at Stanford University. Launched in June 2016, the aim of Project Bloks is to create an open hardware platform which will help designers, developers and researchers build the next generation of tangible experiences for kids. By creating this open platform, the initiative hopes to remove any existing technical barriers so that designers can focus on experimenting, innovating and creating new ways to help kids develop computational thinking.

What Problem Is Project Bloks Addressing?

Children are a naturally curious and inquisitive breed. They learn by using their hands, building things, breaking stuff and collaborating with their friends. With this in mind, Project Bloks is actively developing a set of tools that will enable these kids to learn by making code physical, so they can play with it. Ultimately, the goal of the project is to enable young learners to develop a set of foundational problem-solving skills through tactile, playful coding experiences.

One of the best things about Project Bloks is the universality and accessibility of the platform. It can be a valuable tool for little kids who cannot read yet, while there are also possibilities for children with dyslexia and visual impairments who can gain access to coding without having a thousand syntax errors. This is a really exciting venture! Project Bloks is adding an extra experience layer on top of the approaches already taken by for example MIT with Scratch, ScratchJR and Blockly.  From a business point of view it’s definitely a clever move by Google, some commentators calling it an interesting response by the internet giants to Apple’s launch of Swift Playgrounds earlier in 2016. 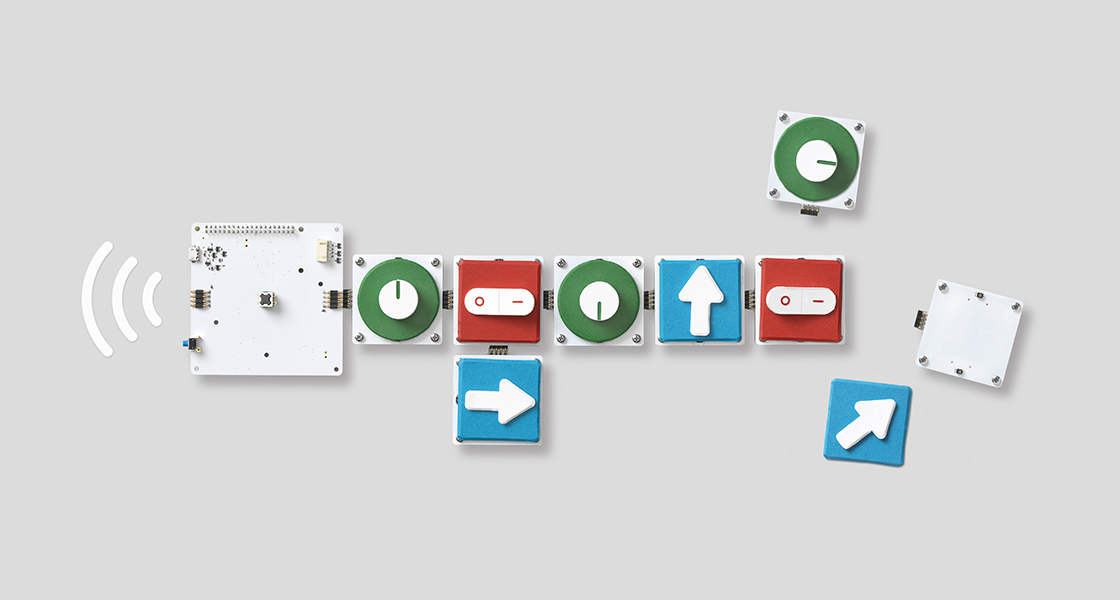 There are basically three key hardware elements to Project Bloks - Base Boards, the Brain Board, and pucks. Together these parts form a reconfigurable system for controlling hardware devices like robots and toys, as well as applications on a computer or tablet.

These are individual tiles that are placed on top of base boards. Pucks can be programmed with different instructions like “turn on or off”, “move in a direction” or “increase power”. The can be made from a variety of materials (cardboards, plastic, wood) and contain no electronics. Inside each puck there is a capacitive signature, drawn with conductive ink, which identifies the action to be taken.

The base boards have their functions specified by the puck placed on them. They include a special sensor which reads the command expressed by the puck. Once the value is sensed by the base board, it is communicated onwards to the surrounding blocks - forming a sequence of instructions.

This is essentially the central processing unit for the entire system. Built with a Raspberry Pi Zero as its microcomputer, the brain board provides power to surrounding boards. Its operating system holds a multitude of libraries and small programmes to integrate with external devices. The brain boards also has a button to trigger the command sequence, a built-in speaker and amplifier, and also an optional LED output panel.

The boards can be rearranged in many different ways to provide various physical coding experiences. Kids could create a music maker where physical code is used to compose music, which is then sent to a wireless speaker. They might enjoy creating a sensor lab, using the physical code to create a sensor that detects a drop in temperature and turns on a light. Similarly your kids might build a coding kit to control toys, like getting a robot to draw on a piece of paper.

Project Bloks certainly has the potential to become a tool for enabling solutions to problems. As a parent and someone who works in special education, I’m very excited because the whole world is going to be developing tools that I might use in my profession and also when playing with my kids. I’m even more excited when I hear Jayme Goldstein, Project Lead at Google Creative Lab say that the ultimate aim of Project Bloks is to give all the work they have done back to the education research community for free, to accelerate the field of physical programming for kids.