JAWS contains an auditory feedback feature called "phonetic announcement" that is both useful to some users and annoying to others.  Today, I will provide a brief overview of this feature to explain what it does, as well as explain how users can enable or disable the feature.

What is the Phonetic Alphabet?

Also known as the spelling alphabet, the phonetic alphabet is a set of words that are used to stand in for individual letters when individuals are speaking to each other from long distances, unable to see one another.  For example, the phonetic alphabet is generally thought to have been developed by militaries who needed to communicate clearly with one another through telephone or radio.  Though functional, these means could mean that certain letters would be mistaken for others if the connection was not clear.

Here is a link to the Wikipedia listing for Spelling Alphabet, where a list of currently used phonetic alphabet words can be found.

How does this work in JAWS?

The phonetic announcement feature in JAWS makes it very clear to the listener what letter is being communicated.  For example, when enabled, if a user navigates by character through a word, etc., JAWS will announce the letter "n" as "n, November."  For some, the letter "n" can be mistaken for the letter "m," but because JAWS says "n, November," there is no ambiguity about what is being announced.  This can be especially useful for individuals who use the spell word shortcut, Insert + Numpad 5 pressed two times.  For example, if a user heard the word "no" but was not sure if it was the word "know" or not, they could check its spelling and hear it read as "November, Oscar" as long as phonetic announcement was turned on.

This is great and all, but it's not for me!

Understandably, not everybody wants this feature enabled.  For some reason, I found that some computer lab computers at my school had it turned on!  So, how do we access and enable/disable it?

It's not too difficult to locate phonetic announcement:

And there you go! I hope this helps explain an interesting, useful, and not always useful feature to you all! 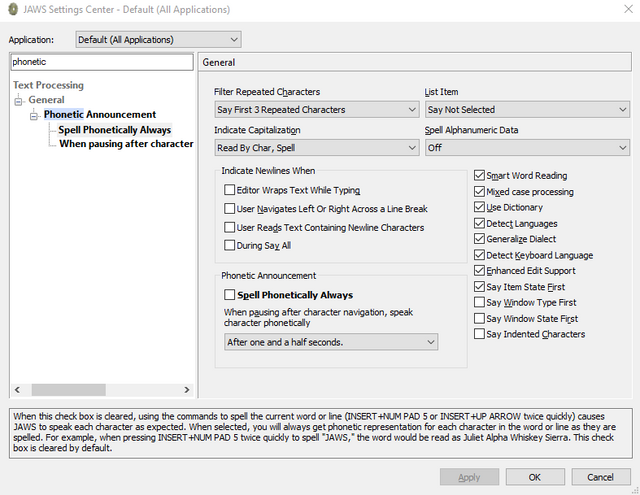