Comparing the use of Control +/- zooming with Windows Magnifier

Windows computers are the most common type of computer that you will encounter in school, work, and community settings.  As a user who has a visual impairment, you will likely consider what your options are for magnifying or enlarging the content of the computer screen.  Many of you are familiar with commercial products like ZoomText or MAGic, but there are two free, built-in magnification options that are available on all Windows computers; once learned, you will be able to confidently address your magnification needs wherever you might find yourself using a computer!

The options I want to share and discuss with you today are the Control Plus/Minus hotkeys, as well as Windows Magnifier.  FYI, I wrote a post all about Getting Started with Windows Magnifier earlier that you can find it HERE.

Using the Control Plus and Minus keys is probably the best known magnification tool on Windows computers.  Pretty much, tapping Control + or Control - adjusts the zoom level of a given program.  The pictures below from a few different browser screens will show you what I mean.

Here on my computer screen there are black bars on either side of the webpage.  Some websites are set up like this, with defined edges.  For me at this zoom level, text is fairly small in size, and likely to be difficult for individuals who experience low vision to read comfortably without leaning in or other magnification.  However, it may be helpful for some with visual impairments to zoom out until they can clearly tell what the bounds of a webpage are supposed to be, as a matter of baseline orientation for a webpage, before zooming in further. 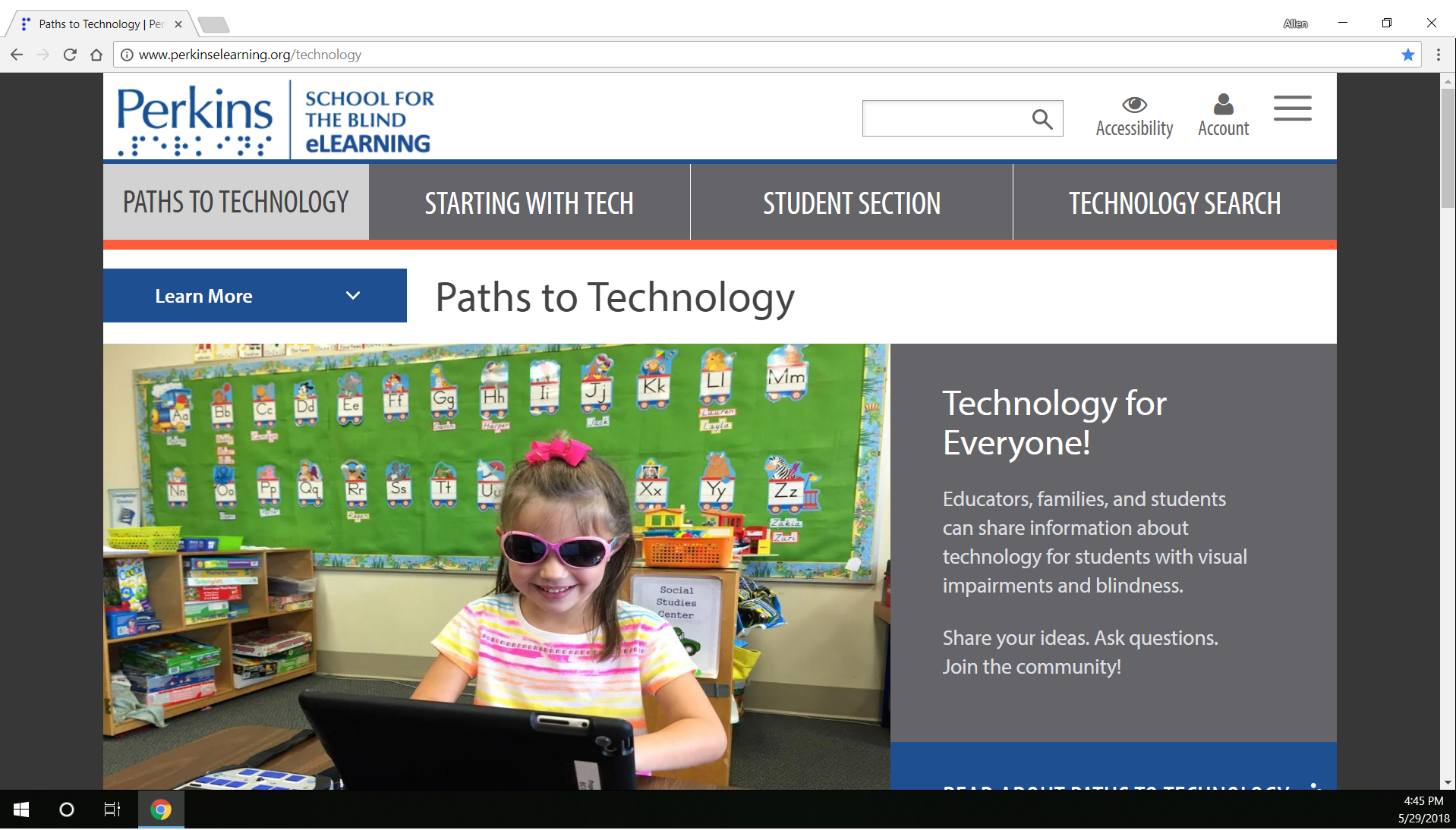 I pressed Control + a few times until the black bars on the sides disappeared from my zooming in, or enlarging the webpage.  Now it "fills" my browser window, and the text is a bit larger, perhaps a more comfortable default zoom level than 100%.  Notice, however, that I cannot see as much webpage content at this zoom setting.  (FYI ignore the fact that you no longer see my Windows taskbar at the bottom, that was not erased due to the Zoom setting) 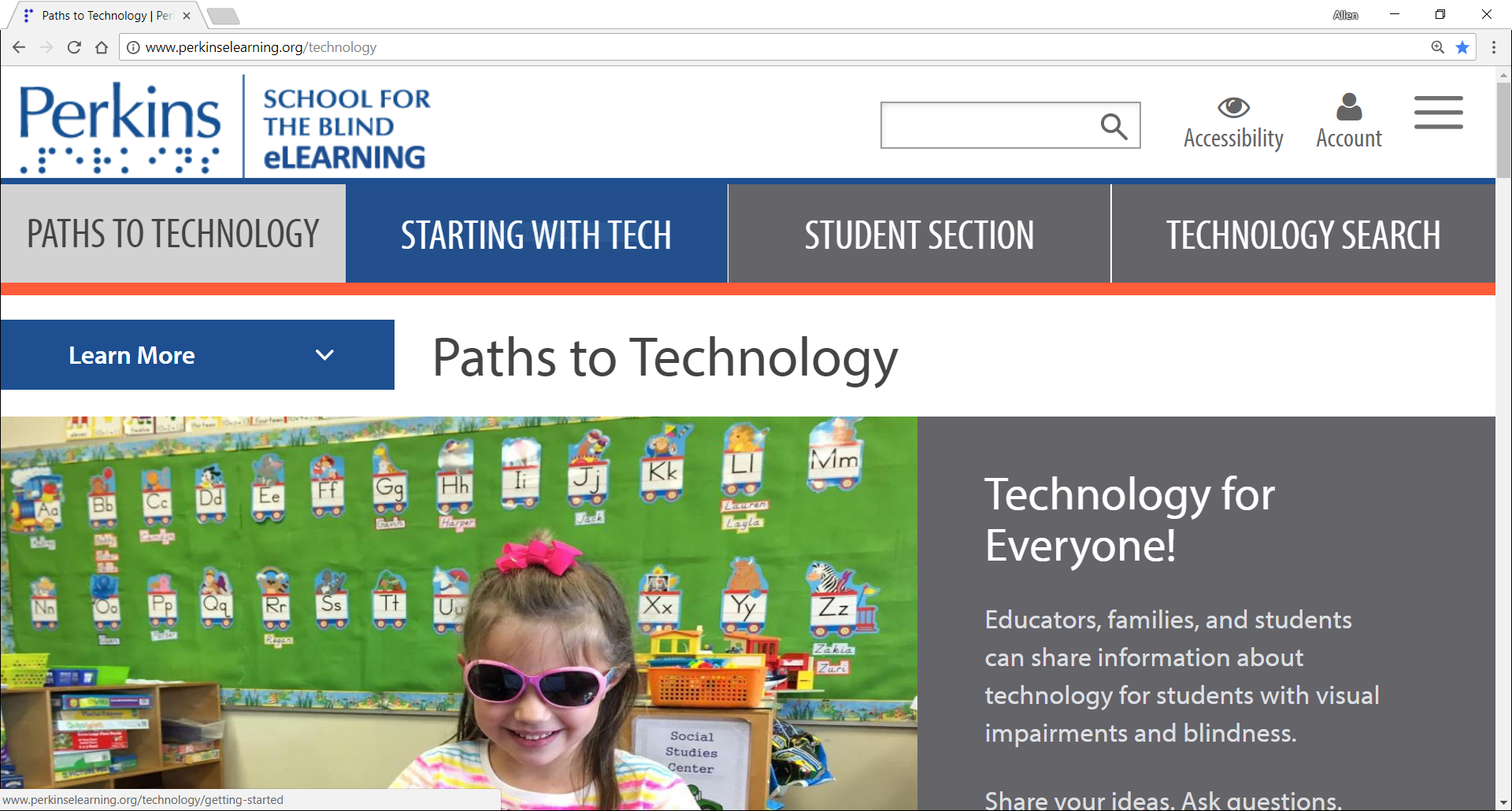 Here I have zoomed in to 200% to demonstrate what it can do to a webpage.  Text sizes are pretty large and likely beneficial to someone with a visual impairment, but look at how much of the page can be viewed at once! Much less!  Due to the formatting settings on this webpage, the section titled "Technology for Everyone!" has been totally removed from the right side of the graphic of the girl smiling as she wears sunglasses, and you actually cannot even see the girl.  At this zoom level, I would clearly need to scroll down before I could get a better understanding of the webpage's content. 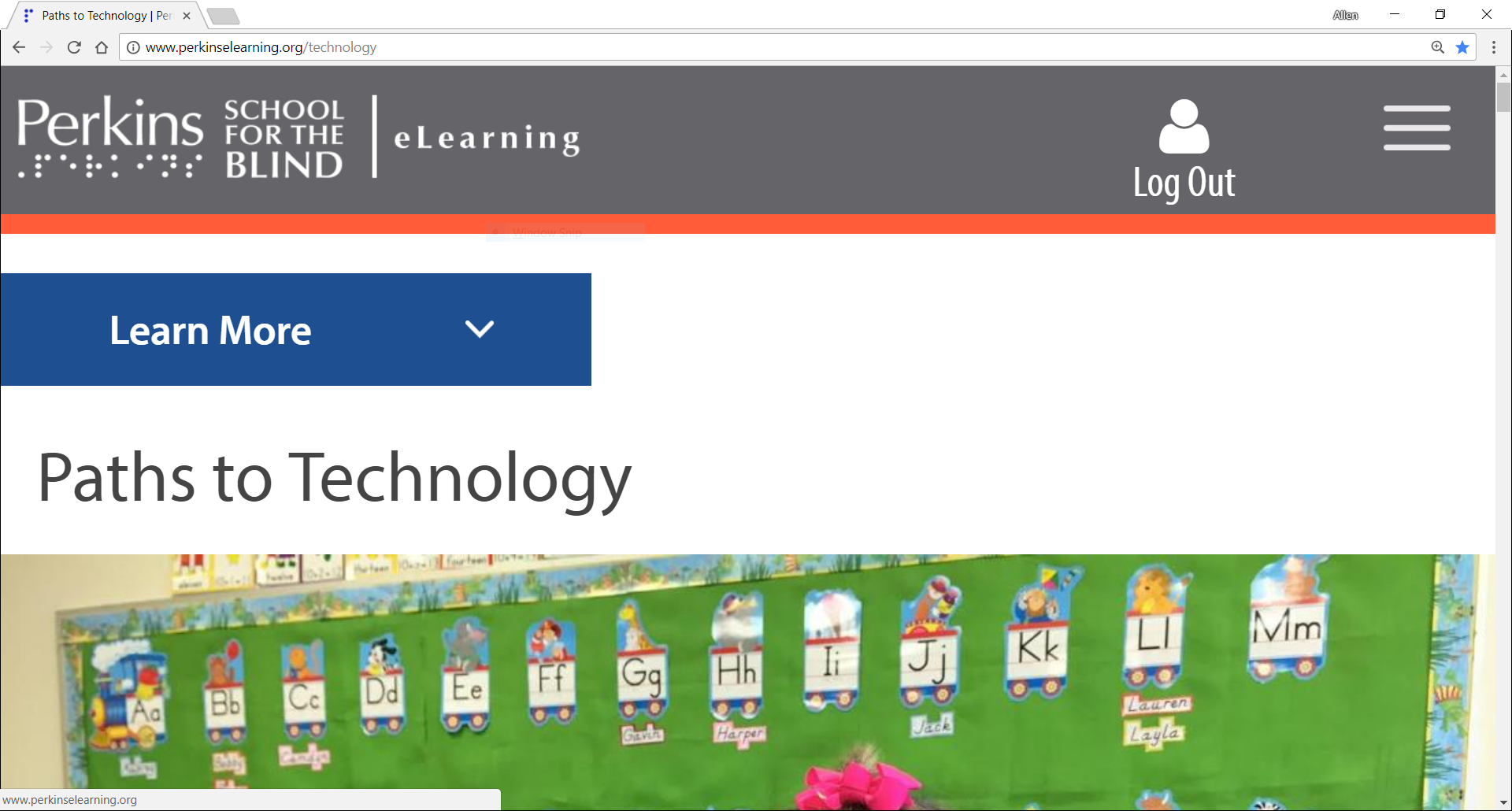 Here is another example of a webpage set at 100% zoom.  In this example, Wikipedia is formatted differently than Paths to Technology.  Specifically, it does not have "boundaries" on the left and right sides, there are no bars on the left or right.  Some websites will behave like this, and the text size will simply increase or decrease according to your zoom level.  The text will adjust its positions throughout the webpage according to set layout and formatting parameters.  See the next image to get a feel for what I mean. 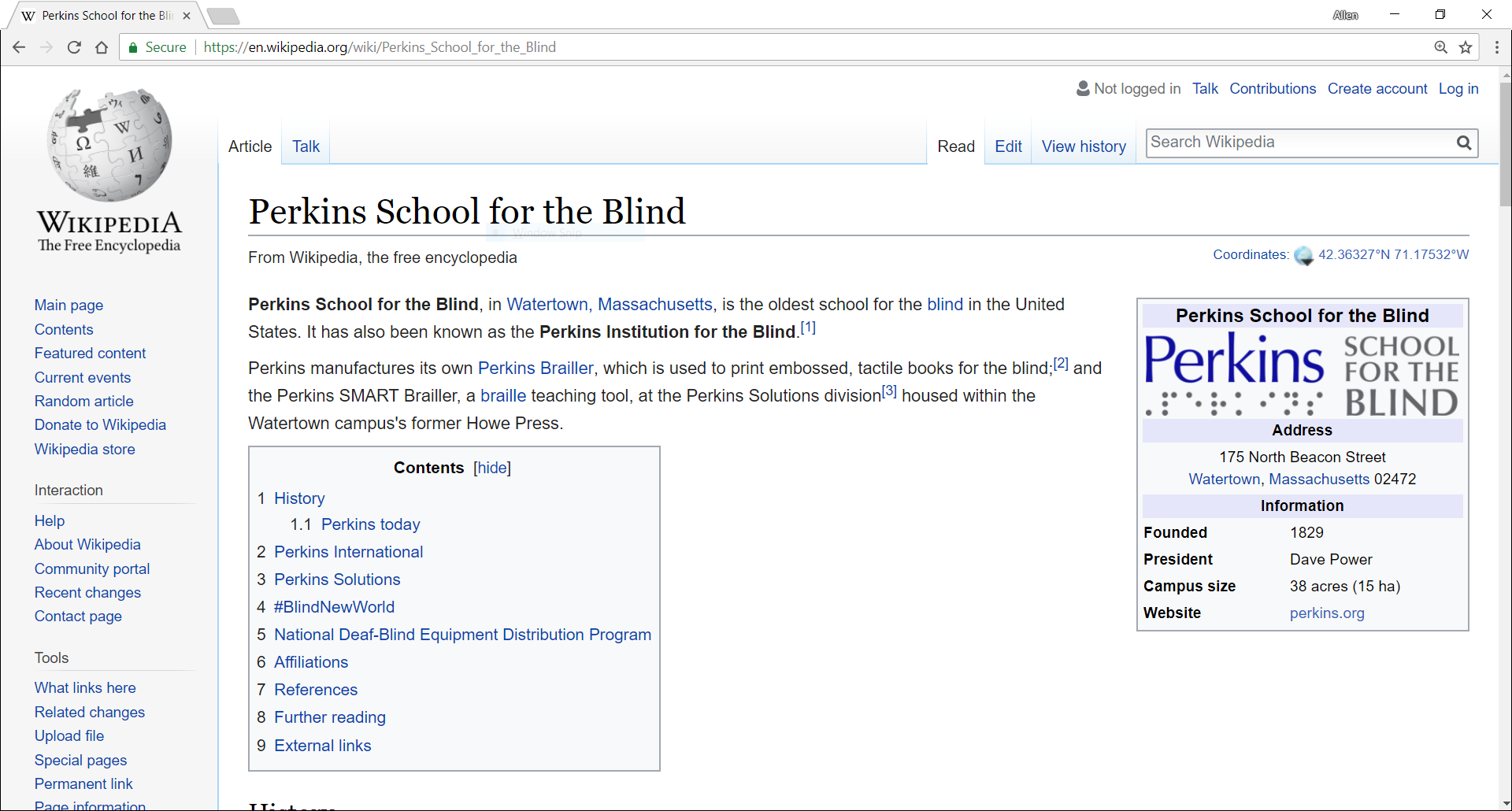 After setting the Wikipedia page to 200%, you will notice that the text sizes throughout the webpage have increased noticeably.  However, what once was a wide paragraph block to begin the article has become a somewhat narrow, "pinched" block of text that is sandwiched between the left side menu and the information table to the right, both of which are "pinching" the text because they have more anchored spatial properties that have gotten larger.  Again, at higher zoom levels, users will need to scroll more often to read the contents of the webpage, and they may encounter strange formatting as a result of such zoom levels that they will need to make sense of. 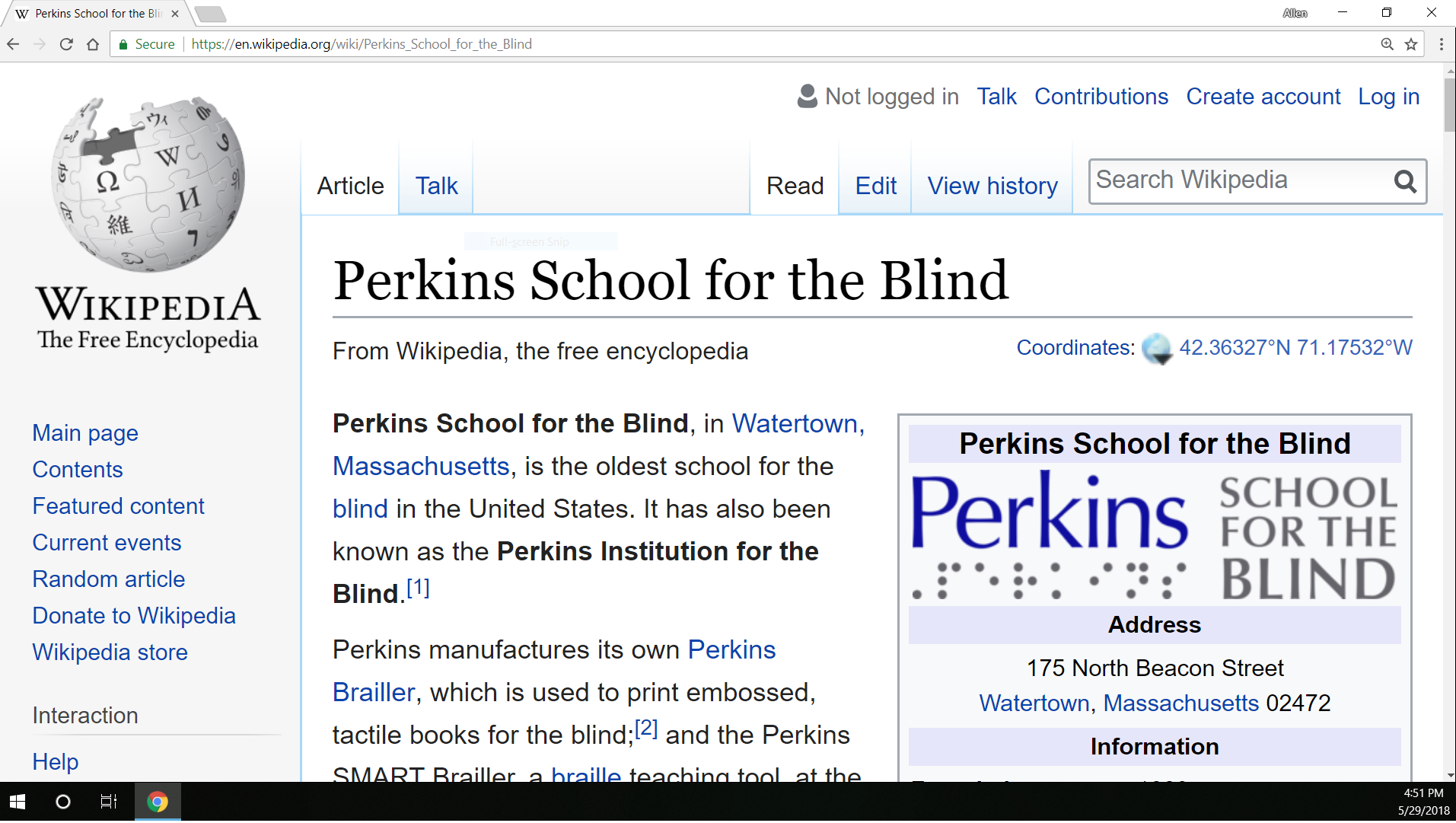 So What's the Deal with Control +/- Zooming?

Here are some pieces of information I think are integral to understanding Control +/- zooming and its approrpiateness for individuals with visual impairment:

It is useful for enlarging text, but not without "consequences"

It is not a universal solution for screen enlargement

What about Windows Magnifier? How Does it Compare?

Windows Magnifier, as I describe in this post, is a free, built-in screen enlargement/magnification software.  When it is enabled using the Windows + hotkey, users will see the screen dynamically "zoom in," cutting off the edges of the orignal full screen.  Below are some before and after pictures, in which you will see my desktop background become magnified, though the edges of the screen will be cut off to do so.  With Magnifier on, I can see the tree closer up, though I no longer see as much of the sky above or the taskbar below.  If I were to want to tell the time from the taskbar with Magnifier, I would need to move my mouse or use the Alt + Control + Arrow Keys commands to pan the magnified screen to the bottom right corner of my screen. 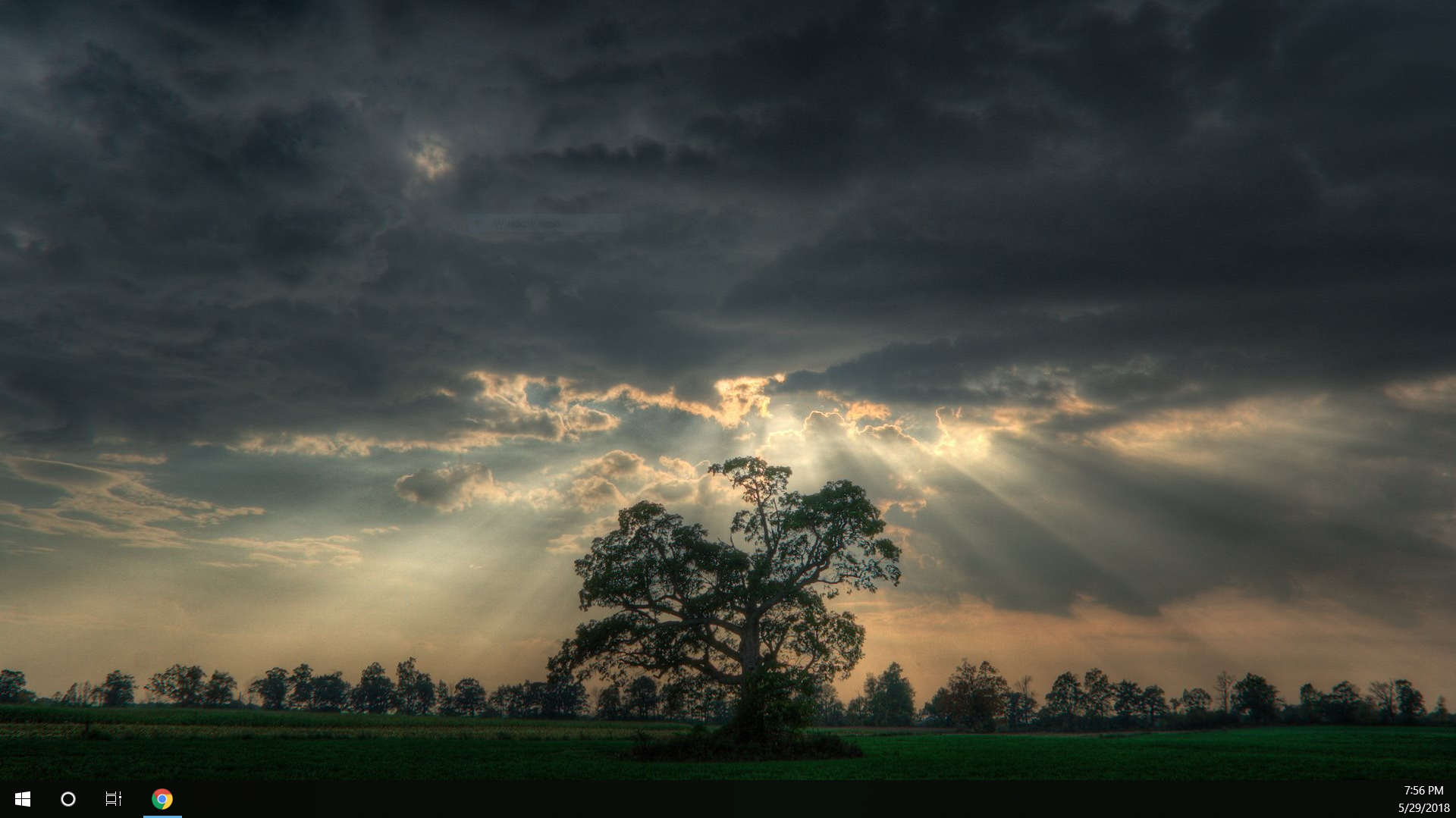 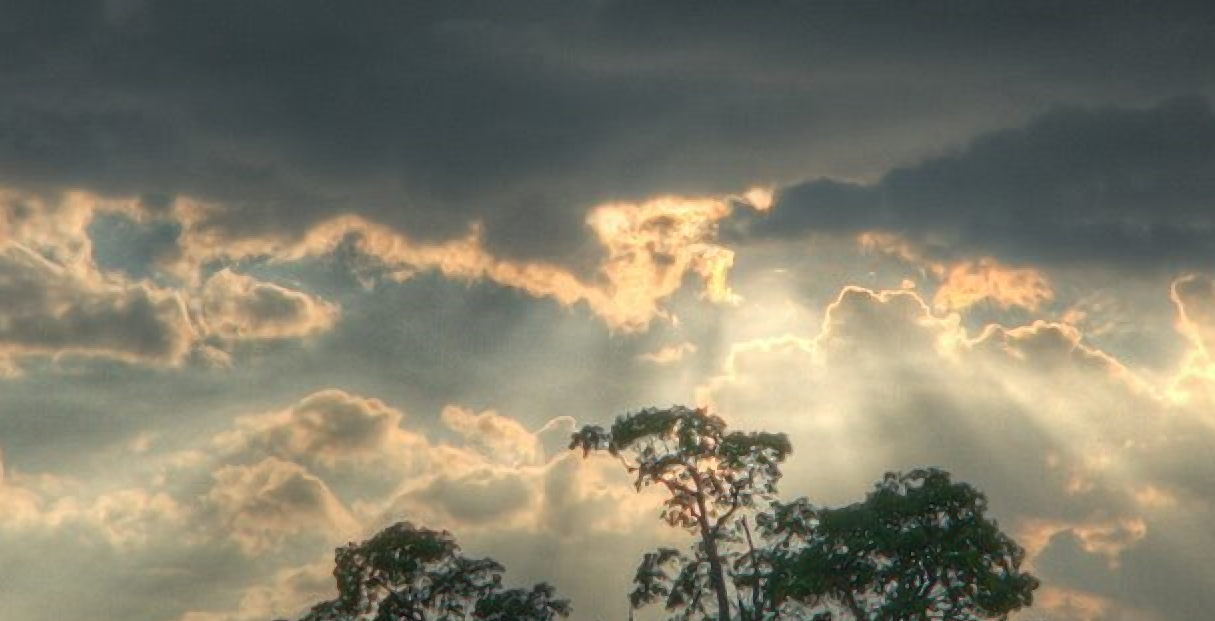 Here's what I think about Magnifier, considered against using the Control +/- zooming method.

Magnifier performs at the system level, not the program or webpage level, and it is more versatile

So there you have it, hopefully a helpful breakdown of major considerations when using Control +/- zooming and Windows Magnifier.  When I discuss these options with my students, I don't tell them that they have to use one approach to magnification on the computer or the other.  I do, however, discuss these very considerations so that we can begin the process of becoming independent in realizing the situations that make one approach more appropriate than the other.  So, feel free to try these out yourself and let me know what you think in the comments below!